Hit enter to search or ESC to close
News

This Just In: A Local Veteran, A New Home and Habitat For Humanity

Click here to visit the Asbury Park Press article from May 20, 2019 or scroll below.  Please share this article with your friends and family through your favorite social media channels. There are many more deserving people who need our help.

This is the 56th single-family home built by Habitat’s Monmouth County affiliate. A closer look at how they pull it off.

By Jerry Carino, posted on May 20, 2019 by Asbury Park Press
Photos by Peter Ackerman 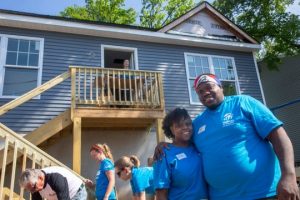 KEANSBURG – The first time Roger Pharel heard he could get a brand-new home at a bargain price, he didn’t believe it.

“I thought it was just smoke,” he said. “I blew it off.”
But his friend from their time together in the Army National Guard, Carlos Johnson, persisted, goading him to apply with Habitat for Humanity in Monmouth County.
The fruit of that decision was on display last week, as dozens of volunteers built a house for Pharel, his girlfriend Kimberly Puryear and their 15-month-old son Jacob on Maple Avenue in Keansburg. The two-bedroom raised ranch is the 56th single-family home built by Habitat in Monmouth County. A 57th is going up right now in Long Branch.
“I still can’t believe it,” said Pharel, who participated in the construction. “It’s cool that I can tell my son I helped put the flooring down in the house. But it’s still surreal. I am so happy that they blessed us with this home.”
They had been living in a one-bedroom apartment in Asbury Park. Pharel, 35, is a Neptune native who served seven years in the Army National Guard and was deployed in Iraq for 18 months. He works as a tech at a nearby surgical center.
“We needed room to grow,” he said. “We were throwing out our stuff to make room for his stuff. This will make a world of a difference. Now he’ll have a yard to run around in.”
It’s a small miracle, one that Habitat for Humanity keeps producing.

As everyone knows, the cost of home ownership in New Jersey is astronomical.
“We were talking with people who had built homes after Hurricane Katrina and they said it cost $100,000,” said Diane Kinnane, executive director of Habitat for Humanity in Monmouth County. “We said, ‘$100,000 to build a three-bedroom home? You can’t do that in New Jersey.’”
Kinnane ballparked the cost of building Pharel’s home at “just under $200,000,” a prospect made easier by all the contributors. In this case, the heating/air conditioning system, roof and siding were donated. Most significantly, so was the land. An elderly woman had lived there; after her passing, her family donated the plot (her house had to be razed).
“It was a family who supported Habitat and felt strongly that they wanted to make a difference,” Kinnane said.
The mortgage for Pharel and Puryear will be $120,000 with a “very low” interest rate, Kinnane said. Habitat will assign a mentor to help them adjust to the responsibilities of homeownership.
“Knock on wood, we haven’t had any foreclosures,” Kinnane said. 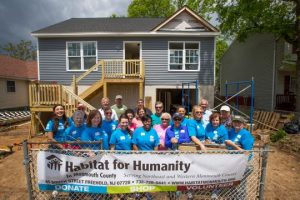 Habitat for Humanity’s lifeblood is the volunteer effort. Last week was its annual Women Build, featuring 20,000 women working on projects in 300 U.S. communities. Between the Keansburg and Long Branch houses, there were roughly 80 women helping out.

“It’s a really unique thing in you can see what your contribution goes to,” said Kim Stulb, a frequent volunteer who was working on Pharel’s home. “As you drive around the neighborhood you’ll say, ‘I worked on that roof.’ If you see kids playing you’ll say, ‘I laid the sod in that yard.’ It really makes it worth the time.”

Stulb, who lives in Hazlet, connected with Habitat through her employer, T&M Associates. The Middletown-based engineering firm is a longstanding Habitat supporter.

“I’ve heard from a lot of the construction managers that we do better than the males,” Stulb said with a smile. “We take direction better, we’re a little more creative and we know how to swing a hammer, too.”

As Stulb gave this reporter a tour of the house-in-progress, the pride of helping a veteran was palpable.

“I’ve done a lot of these builds and they’ve always been fantastic, and this is my favorite,” she said. “We’re not just helping a family. We’re helping a family who has helped us already. So it’s awesome.”

Though the bulk of the work was done last week, the home won’t be live-in ready until late June or early July. There will be a ceremony, and Pharel knows it’ll be hard to hold back tears.

“Sometimes people forget about us,” he said. “To see Habitat and the volunteers pour their energy into helping veterans, it touches my heart.”

To make a donation, volunteer or find out more about Habitat for Humanity in Monmouth County visit www.habitatmonmouth.org.

Jerry Carino is news columnist for the Asbury Park Press, focusing on the Jersey Shore’s interesting people, inspiring stories and pressing issues. Contact him at jcarino@gannettnj.com.

Sign Up for the News!
For Email Marketing you can trust.