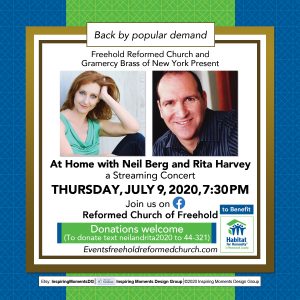 On Thursday, July 9 from 7:30 – 9 p.m., the Reformed Church of Freehold in conjunction with the Gramercy Brass Orchestra will be hosting an ENCORE live streaming concert to benefit Habitat for Humanity in Monmouth County! Suggested donation is $25. To learn more and to make your donation visit www.eventsfreeholdreformedchurch.com.

It is an honor to once again present husband and wife team, Neil Berg and Rita Harvey, performing an inspiring program of Broadway hits and popular music. Rita Harvey has performed the role of Hodel in the revival of “Fiddler on the Roof,” toured as Christine Daae in “The Phantom of the Opera,” and created the role of Lady Edith in the Off-Broadway hit musical “The Prince and the Pauper.”

Neil Berg is the composer/co-lyricist of award-winning new rock musical “THE 12.” His other shows include the new Broadway-bound musical “Grumpy Old Men,” the hit Off-Broadway musical “The Prince and the Pauper,” “Tim and Scrooge,” which ran at the Westchester Broadway Theatre in NY, and “The Man Who Would Be King.”

We would like to thank the Reformed Church of Freehold and everyone that has made this event possible!

The below restaurants will donate a portion of your bill to help Habitat for Humanity in Monmouth County’s programs on the following dates.. at no additional cost to you!   Date Location How to Access Thursday, February 14 Turning Point 92 Ocean Ave Long Branch, NJ RSVP by clicking here Mention  Habitat for Humanity when purchasing…

Habitat for Humanity in Monmouth County is excited to host two gift wrap stations this year! One will be at the Monmouth Mall in Eatontown, and the second will be at The Grove in Shrewsbury. We will be wrapping during the following days: The Grove (Shrewsbury) – December 14, 15, 21, 22, & 23 Monmouth…

Habitat for Humanity in Monmouth County  is excited to host that its 3rd Annual A Taste for Homes Wine & Food Tasting Event at the Oyster Point Hotel on the Navesink River in Red Bank from 6:00 pm to 9:00 pm on May 21, 2018. The evening will showcase some of Monmouth County’s best restaurants, wineries,…

Habitat for Humanity in Monmouth County joins several nonprofits as benefactors for BuyRite Holmde’s annual Super Sampling event at Eagle Oaks Country Club on November 10 featuring over 500 wines, beers and spirits. Tickets are $125 a portion will support several local nonprofits, including Habitat for Humanity in Monmouth County, and includes sampling over 500 top-notch…

THANK YOU to the more than 120 volunteers that helped us make this year’s Holiday Gift Wrap a success. Hundreds and hundreds of gifts wrapped to help us fulfill our mission to build homes, communities and hope! Did you volunteer with you this Holiday Season? Click here to view the pictures!   Habitat for Humanity…